BLOG: Herculean strength was needed to free a calf stuck in the mud!

BLOG: Herculean strength was needed to free a calf stuck in the mud! 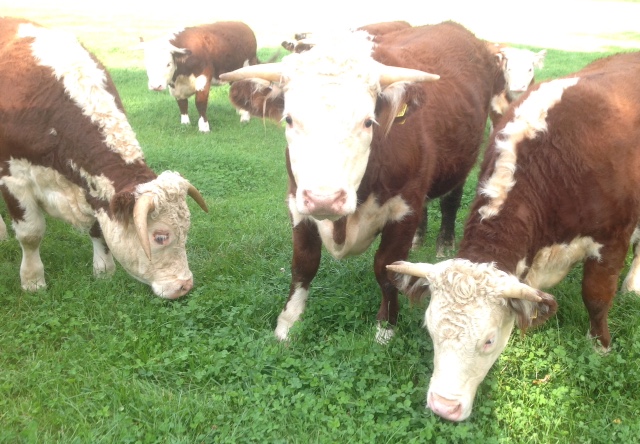 As is so often the case, the week has had the odd highs plus several lows, and, one dramatic moment.
Sackcloth and ashes time… Last week I was guilty of false news. I can only plead overexcitement. I was celebrating the fact that we had had our 100th calf since we have been farming Rush Farm, and this got transmogrified into the statement that we now had 100 animals in our herd. I can only offer my apologies!

The highest point came from a cow who eventually, some 750 days since last calving, presented us with a large bull calf. Another positive was to find that our ATV which seemed to have gearbox trouble was merely suffering from a bent gearstick. Obviously there has been some speculation as to who could have had the strength to do this!
All pastures are looking good but what is particularly splendid is that the field sown this spring, and about which we had grave concerns, seems at last to have come good. This is the field for which we rejected a conventional rye grass mix for a mix made up of fescues and timothy together with chicory and other herbs. 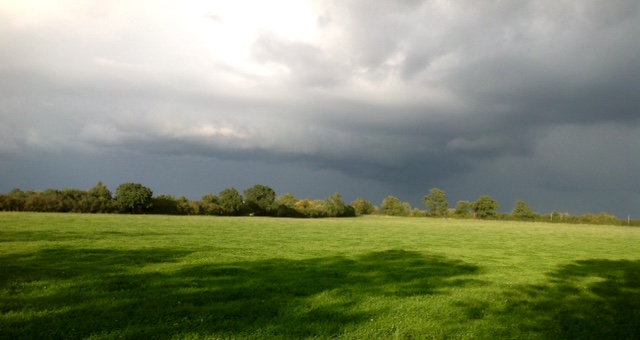 Further topping was necessary this week to stay on top of the thistle position, though having said that, for the first time we have seen the sheep eating thistle shoots – and before any one jumps in, it is not because there is no grass!

We had planned to spray this week but the weather was not supportive. We shall aim for that to take place next week and, now that we have sets of the other preparations, this year’s compost heaps can be treated in readiness for spreading next year.  This year, for the first time, we had enough compost to spread three fields thickly and, my goodness, the improvement in those three pastures has been obvious. Now we have nearly sixty cows? we might be able to compost the majority of fields every year. 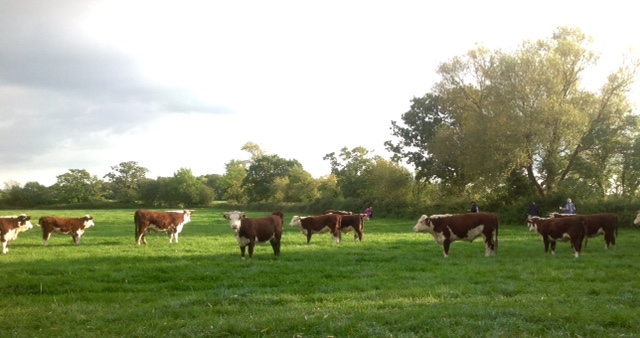 Against these highs, we lost a steer and six lambs.
The steer’s death was most baffling. Bloat is the most likely cause though unusual at this time of year, but to be fine in the morning and dead in the afternoon in the same field as our bull, Highwayman, who mysteriously died some time ago, led to much speculation and a degree of paranoia; ideas range from poisoning – accidental or otherwise – to ingesting the remains of a Chinese lantern. The initial thought that it might be from eating acorns did not stand up for a couple of reasons; firstly, an animal has to eat an awful lot, and secondly, this has been an ‘off’ year for our oak trees and their production of acorns.
As regards the lambs, after having received an essentially clean bill of health from our vets for our flock, and feeling cheered that we might get through the year without having to drench the lambs at all, six died in the space of five days. Autopsies eventually led to the finding that a parasite called ‘whipworm’ was the culprit. It is very distressing to lose these animals, and with no warning, but now we are aware, we can at least protect the remaining animals by use of a drench.
And the moment of drama for the week? Well, this came when Tim found a calf stuck up to its belly in the mud at the wet end of the scrape. Herculean strength was needed to free the animal, and then an immediate decision was made and acted on to move the suckler herd out of that field!

A key objective for this week on the office-front has involved fending off issues raised by Natural England, and, starting the process of bringing the documents together that will be needed for our impending Demeter inspection.
The main documents that have to be available include evidence that: we have only used organic seed and feed, that our medical records are complete and appropriately detailed, providing a record of stock movements over the year, have recorded stock movements on and off the farm, and have used biodynamic preparations as required. Additionally, there is of course a questionnaire to be filled out answering such questions as how much nitrogen have our stock put on the ground.
All really good fun, except on the day when it is rather like sitting an exam! Usually I do the indoor stuff while Chris does the equally important task of taking the inspector on a tour of the pastures and observation of the stock. Looking at the stock involves judgements on the overall condition of the animals and in addition, for the sheep, the extent of lameness in the flocks.
On Saturday, I immersed myself in the Barbirolli recoding of The Dream of Gerontius. Originally recorded in 1964 and then remastered in 1999, it is a work of immense and overwhelming emotion that must speak to all, whatever ones’ position on faith.
Aside from music, my mind has been spinning along lines triggered both by woofers and words heard on the radio. A remark in one email forced me to face up to the fact that my knowledge of Morocco was not impressive and that I had little on my shelves to increase said knowledge.
Fortunately, if you dig deeply enough on the internet quite a lot can be found and tied into other bits of knowledge. From past reading I had known of Kaiser Wilhelm’s desire for colonies but not properly appreciated his attempts to take North Africa into his ‘sphere of influence’. Nor, despite my exploration of religion in that part of the world had I realised that Morocco had forged its own interpretation of Islam.
A series on Englishness on Radio 4, at 9am from Monday to Thursday, caught my attention. Ranging from George Orwell, via John Betjeman, to Barbara Castle, it was a useful reminder not only how the use of common law rather than the Napoleonic Code separates us from the rest of Europe, but how English socialism was so very different from the ideological driven idea of socialism, beloved of continental Europe, where you start from a principle, and then attempt to fit the individual into the scheme in some way.
I was also interested to hear Billy Bragg, and much that he said I felt very empathetic to, which rather surprised me! If you have not read the essay by Orwell entitled ‘The Lion and the Unicorn’ recently, I suggest you read it again. If like Popper’s ‘The Open Society’, it was to a degree the product of wartime thinking, it is none the worse for that.
A far more daunting challenge was how to explain the reasons for so many verbs in English being ‘strong’ while the vast majority are ‘weak’ or regular. In the end, I retired defeated! Though the ‘Loom of Language’ is a favourite of mine and a copy is placed in the mobile home for the woofers, I could do no more than say that the most common and oldest verbs are irregular, the newest and also the least used old verbs are regular, and you just have to learn them!
I realised also that there is no need to be defensive; all languages have irregular verbs and it could be worse – we at least we don’t have seven classes of them as do other Germanic languages! Rather amusingly, Oliver Kama, writing a short piece in the Times on the use of prepositions, concluded his piece by writing, I paraphrase, ‘correct grammar relies not on elegance or logic but how we actually use the language.’ And that of course is ever changing – just think how the meaning of ‘ idleness’ has shifted from a ‘search for wisdom’ to today’s meaning!
Enough, I will end with the weather which in general has lived up to the met office forecasts even if in detail it has born no relation to them! Sunday afternoon, despite the circling thunder clouds, was beautifully warm in the sun, enabling a major blackberry picking expedition. As I have said earlier this has not been a good year for stone fruit, but in June we enjoyed a bumper crop of strawberries and raspberries, and now we have an abundance of autumn raspberries and blackberries – how fortunate we are to live in this small part of a small island.
We only went into two fields, but what was very obvious is that the grass and clover is still growing well, even if perhaps not as sweet and nutritious as earlier in the year. A good end to the week. 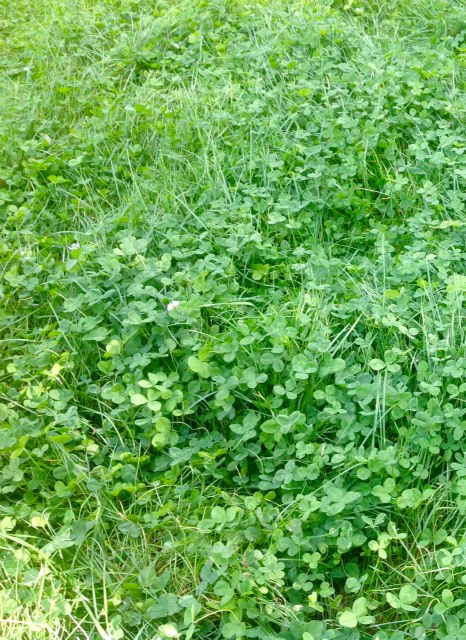