We’ll have to move Bacchus on within the year

We’ll have to move Bacchus on within the year

I was brought up short by seeing pictures of skeletal sheep in Australia – where they really do experience drought. For all our moans I/we do need to keep a better sense of perspective. We may wish for rain and worry about having enough winter feed, but our animals are all in good condition and recently, as a special treat, we have been giving them cuttings from hedges and trees. Moreover, given the size and nature of our hedges, shelter is available in every field stock are in.

Talk of flash floods is not as daunting for us as for many. Our ditches are in good repair, our land is essentially level and the cracks in most fields are at least two feet deep and two or three inches wide, and as I may have said before, the headwaters of the Bow Brook are no more than seven miles in length, so we do have floods, but in our time here – and we have had several – they retreat within hours. Perhaps even more importantly, the rain we had on Saturday means the pastures will be a little less like concrete if we actually have the downpours ‘promised’ for today (Sunday).

Following the birth of two further calves we now have 76 cattle, and this figure could exceed 80 before the end of the year. Our decision to let the bull run all year round means calving now takes place all through the year. Bacchus is a very vigorous and fertile bull. Sadly, we shall have to move him on within the next twelve months since we are uncomfortable with the possible consequences of, for want of a better word, incest.

For a short period, we did have two bulls on the farm, but as and when a cow started ‘bulling’ it was as if we had two elephants on musth! They at least had nose rings – Bacchus does not – absolutely no problem unless his testosterone levels are high.

Lambs are not yet ready

Though we have demand for our lambs, the truth is they are not ready, as they are not making the weight gains we would normally expect – hardly to be surprised at.

Faris and Clement are really contributing significantly to the overall work of the farm. They are coping extremely well with the range of tasks allocated to them. They are even coming to terms with the inevitable banter they encounter from and between family members. All the spraying has been carried out by them, checking stock when needed and cutting the branches for the cattle to enjoy.

By the end of the week all fields had had two spraying of 500, as well as one of 501, and we now have sufficient horn silica to allow another spraying of 501 and, enough of the other preparations to add to all the muck heaps. 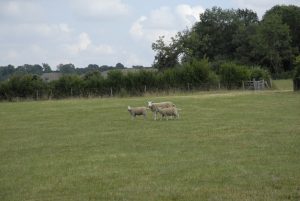 DNA testing of a cow!

The task of producing the documentation for the higher tier stewardship is close to completion. Only a couple of fields have yet to be measured and photographed; I have four quotations for seed, but despite nagging only one estimate in yet for the contractor work. Among the more amusing tasks we had to do was to pluck 40 hairs from the tail of a named cow, apparently randomly chosen for DNA testing. We have no reason to believe this is sinister as it appears that a number of farms that have pedigree traditional Hereford’s have also been asked to provide similar samples. In that we bought our original stock from one of the leading breeders in the U.K. all should be well.

We are actively in the market for straw and hay – which I might say is hard to come by since those who have a surplus know that prices can only rise through the coming months. DEFRA have at least recognised the position and made it possible for organic farmers to get derogation by answering nine reasonably intelligent questions. 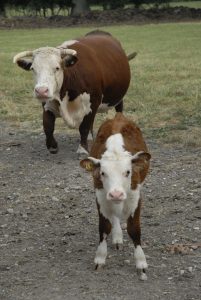 The Reith lectures concluded this week with a lecture about the relationship between the arts and war. In particular, how the arts coped with both the attractions and horrors of war. Though Picasso’s painting of Guernica was not overlooked, the slant, perhaps inevitably was Anglo-Saxon. The only conclusion I could make out was that the less uncertain the population felt the war to be, the greater the artistic output, and the First World War and Vietnam were seen as illustrating this.

I am in the process of reading Stephen Saylor’s latest book in his saga about Gordianus ‘the finder’ Set between 92BC and in this the latest book, 44BC. I think even Professor Mary Beard would applaud their historical background. This is, to a degree, territory that the very popular novelist Lindsey Davis explores but I don’t see any real competition between them.

‘A point of view’ on Sunday had the philosopher John Grey expressing the view that the actions of the European Union as expressed through its bureaucracy might well lead to the complete demise of liberal democracy in Europe. He clearly feels that, we here, for the present at least, are not at such risk. He is of course a provocative individual whose hostility to the views of the American philosopher John Rawls is well documented. Whether you buy into his views or not, his language is always accessible and thought provoking.

The climate is changing

I began with the weather and maintaining a sensible perspective. Literature is perhaps more useful than the Met. Office records. Hopefully many of you will have read ‘Lorna Doone’ which was set in one of the mini ice ages experienced over the last 12,000 years when the UK became habitable once again. I think it was 1812 since the last ice fair on the Thames in London, but in the early sixties the river at Oxford certainly froze over. The summer of 1816 saw famine, as essentially there was no summer – in 2012 we could say much the same. The climate is undoubtedly changing and, while it is only too possible to debate the causes, that change is taking place is an obvious reality, and certainly as farmers we have to lift our eyesight from the immediate foreground to what may well be facing us.

Some thirty years ago the Bromsgrove Music Society arranged for the Lindsey quartet to play Beethoven’s complete cycle of string quartets. Sat within feet of four men totally caught up in the music they were playing, yet willing to talk about the music and its challenges, both before and after, was an unforgettable experience.  I have several examples on CD of the full cycle, indeed somewhere I think I still have the Busch Quartet on vinyl, but the truth is that it’s probably a dozen years or so since I listened to the full cycle. This week turning to the Budapest Quartet in mono I have been reliving that Bromsgrove experience in the afternoons. It is not always comfortable listening but is certainly compelling.

When I began ending this news with a poem I suppose my choice attempted to be appropriate to the time of writing. I confess I have somewhat drifted away from that and increasingly let my choice be a more personal one and reflect my reading over the years. I do, however, as you would expect, exercise some censorship over my choices.

Poetry is an intensely personal matter so finding lines I am comfortable with sharing takes an inordinate, but pleasurable, amount of time. I know from feedback many stop reading when they reach the poem but so…… This week I turn again to William Barnes writing not in dialect but in ‘national English.

A verse from Brown Bennets:

“With the acorns yet green on the wide-spreading oak,

While the grass was yet green in his shade,

That had holden it cool from the sun’s burning stroke

As it brown’d all the hill and the glade:

There the wind of the fall*, in a blast

*fall. Interesting that even as late as the 1870’s this term was preferred to autumn. Fall and spring came into the language quite late as old English only recognised two seasons – winter and summer. I guess autumn was seen as a ‘posher’ word given its Latin origins, but both terms were in use together for several centuries. Fall is now largely restricted to American English given it was both the word in use by the early settlers and because it is so obviously more descriptive than autumn – and of course much easier to spell!

** dried flower stems of grass – from ‘bent’ a common grass like ‘creeping bent’ or. ‘Colonial bent – but as a working word still exists in the vernacular as bennet grass. Bent grasses are especially favoured for golf greens.