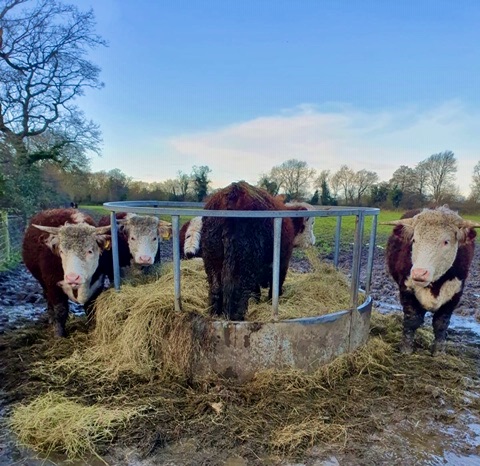 What a totally dismal week this has been. Two classic lines have gone around and around in my head: One from childhood memories of hearing the story of Noah’s Ark with the classic words “And still it rained,” and the other, a reworking of a line from “The charge of the light brigade” – zealots to the left of us, zealots to the right, onwards they charged into the valley of uncertainty – and there we largely remain as a result of Thursday’s vote.

A feeling exacerbated by driving along mud strewn lanes, from verges damaged by vans and lorries, past fields with standing water, pastures more muddy than green and brown, fields prepared for winter cereals but unsown because of this autumns blight of unseasonal rain. All this on top of living in an always cold farmhouse, but now lacking the heat from an out of action AGA. An overblown reaction given what is happening elsewhere in the world of course, but still…….

Inevitably there is little on which to report this week. Happily, the cattle seem fine – indeed one of the eight still outside was found this morning munching away inside the ring feeder in the field. It was not appreciative of being made to get out! I have remarked before, on the misconception many have, that cattle lack agility.

The sheep present a sad picture because of their dirty fleeces, but actually appear to be content in their thick lanoline steeped coats. Brambles as always are a problem since a sheep can quite easily get firmly caught by their thorns.

Clement was out of action at the start of the week with the local bug, but on recovery has not only been supporting Tim and Sebastian, working on his plan to install a mezzanine floor in the farm workshop, but in particular, installing a manhole cover where one has been needed for years.

I do, I think, need to reiterate just how much lying water there is on the farm. Fields that have in our time always remained dry are now a nightmare to walk though. There are at least five fields with mini lakes. Some tracks, especially between gates are quagmires.

Two family birthdays brought some cheer, as have the Christmas cards that are now coming on a daily basis – a hint that perhaps we too should accept Christmas is coming soon. Cheering also is the fact that the bull swop is confirmed, and a market has been found for two of our steers.

Topics from the Pasture Fed site

There have been two main issues discussed on the Pasture Fed site; skating over the issue of ringworm in cattle, the discussion relating to the decline of the cuckoo population has been instructive and revealing. Clearly many farmers knowledge of the bird life on their farms is more limited than I had assumed, and so while some had noticed the reduction in cuckoos heard had registered, the significance of farming practice as a possible cause was not realised. In truth, climate change is also a factor, but one of the ‘host’ birds, the Meadow Pipit, does require conditions for breeding that intensive farming and tidiness don’t allow for.

We had hoped that our farm bird population would be surveyed again this year, but circumstances prevented that; so, we are not clear as to the extent of abandoning spring cereal sowing might have had on bird diversity.

Some unusual and interesting names

In terms of my reading I am still immersed in Tom Holland’s book, and have reached the coronation of Otto as Holy Roman Emperor. The names I have come across, some for the first time, are truly splendid – Willibrord, Wilbert, Alcuin and Boniface. In passing, Anne and I came to an understanding of the difference between Augustine of Hippo and Augustine of Canterbury. I have learnt more about the Angles of Northumbria, the Friisans of East Anglia, and the Saxons of the south of England. I have enjoyed discovering why the German Lande of Saxony has nothing to do with the original Saxons of North Germany. I have seen parallels between the missionary zeal of those from England who worked to convert their erstwhile brethren, the pagan Saxons of north Germany, and reflected on the impact of that same zeal which was later adopted by others and which has continued right up until the present, and the consequences we all live with today.

Alcuin, a major figure in the court of Charlemagne and from England, wrote:  “This race of ours, mother of famous men, did not keep her children for herself, … but sent many of them afar across the seas, bearing the seeds of life to other peoples.”

The first stirrings perhaps of that English sense of exceptionalism – another problem we live with today, though reduced somewhat in comparison to American exceptionalism!

Married into a family that regarded Goethe as one of the ‘greats’ of European culture, I have periodically attempted to understand on what his reputation is based. I am aware that his work on colour is still highly regarded but have never managed to ‘get into’ his writings. Obviously, the man was a polymath, and his writings and thoughts on a wide range of issues have influenced many modern thinkers, even if his plays and novels have not quite stood the test of time.

I recently came across a book (owned by my late father-in-law) written by an Oxbridge don of high repute. David Luke in the introduction to his book, (which at the time claimed to contain the largest selection of Geothe’s poetry translated into English) and which was published to commemorate the 250th anniversary of Goethe’s birth, saw Goethe’s international status resting essentially on his poetry. Poetry which Luke felt had a natural affinity with the rhythms of the German language – which therefore poses enormous difficulties for any translator, and which possibly has shut off many English readers from appreciating Goethe better.

The fragment below is drawn from that selection and is the one I felt most affinity with:

But since the end of all poetic art
Is the improvement of the readers mind
(Or so we’re told) my verses for their part
Shall point the usual moral of their kind:
This life’s a crazy journey, and our heart May stumble,
but two mighty powers, we’ll find,
Can move the world and help us as we go:
To Duty much, to Love far more we owe