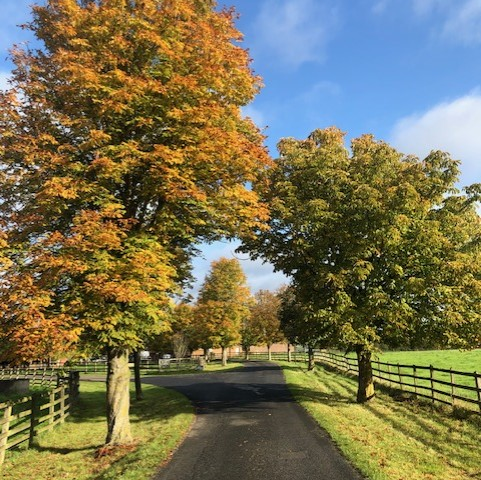 “This blog is the unfolding story of Rush Farm and an exploration of life by its philosopher farmer.”

Looking back, I realise I passed over the treatment of the cattle for their trace element deficiency much too casually in my last notes.

In fact, the exercise was neither short nor easy given the number of cattle we now have, and aside from Tim, Chris and Phil the vet, all bar one of the grandchildren played their part. All the animals over 200kg needed treatment so, one after another, each herd had to be moved into the barn and then each animal of sufficient weight put through the race to have two boluses inserted into its rumen or first stomach – a task for Phil rather than Tim or Chris. The upshot was that the humans involved were both physically tired and satisfied at a necessary job well done, and all the cattle were back on their pastures hopefully not too disturbed by all that had happened.

I wrote a week ago that we appeared to a run of having a new calf born every week. And this week did start in that way but sadly it was a first calving, and it did not go well. The mother survived but not the calf. Such deaths hurt; there has been considerable discussion on the pasture–fed site as to how farmers can be helped to cope with these events which, even for stock farmers, are draining emotionally. From the many responses a few named individuals volunteered to provide a ‘help line’.

Otherwise on the site, the main discussion centred on planting quick growing trees, like willow and poplar from ‘whips’. I assume this sudden interest in the topic had something to do with the proposed requirements on farmers to be ‘greener’. I hope I was correct in not taking a great interest, on the basis that more than ten percent of our land is already tree covered, though I was interested to learn poplar could be established as easily as willow, so long as the base of the ‘whip’ is deep enough for roots to find water.

I had hoped to start with the more light-hearted news that the week began with 2/3 of our lambs finding an open gate and trotting off down the bridle path. Fortunately, the electric gate into the farm was shut – the thought of 120 lambs getting out and onto the road was not a happy one!

At this stage the lambs appear to be doing well.  Overall, probably the most important event of the week, was actually the pre-tupping health check of the breeding flock. Aside from the general condition of each ewe, the task was to check feet, teeth and udder. Sadly 13 did not pass muster. This brings the size of the breeding flock to where we were some eleven years ago, and decisions have to be made whether we buy in new stock. We will in any case hold back the best ewe lambs from this year’s lambing, but they won’t be put to the tup until they are a year old – 2021.

Otherwise only the re-seeding of the last field to be done as part of our higher-level stewardship contract is worth noting. This involved spreading wildflower seeds at the very low rate of 1kg per hectare – a much more difficult task than an ordinary re-seeding. Incidentally, the cost of these seeds was quite extraordinary.

Next week should see more activity, including perhaps the erection of the new barn, but otherwise, all being well, life on the farm should contain no new excitements. The daily routine of checking stock together with the weekly movements will, for a while, continue to be the main emphasis of life.

Daniel left us, and we are very grateful to him for the time we spent with us; but the departure of Daniel obviously means Tim is once again mostly working on his own. This life is not one for those who crave company!

There has been more planting in the verges of the drive. A member of the family whose garden has an abundant number of cowslips has been nurturing seedlings for us through the summer, and the results was some 25 healthy plants. They, and the wildflower seeds, should take, given the rain we have had and the warmer end to the week.

There are some towns in which getting lost is an almost invariable experience. Our bete noir in the north-West was Macclesfield. Here it is Redditch. Before leaving for Canada, driving through Redditch was straight forward, and since the route took one through the town centre and some rather fine Victorian buildings, quite enjoyable. And then it was designated as a ‘new town’, significantly increasing its population, and making finding familiar places all but impossible.

However, at this time of year the work of the planners shows, that which they certainly got right. There was massive tree planting, especially alongside the ring roads, and in the autumn for a few weeks these provide a feast for the eyes. The colour palate is extraordinary; from chrome yellow to lemon yellow to a very pale yellow interspersed with the bright red of the cherry trees and the usual range of browns – no need to go to the USA for sights like this. The trees must be fifty years old and some are really large, what is not obvious is that there are signs of succession planting which is a little concerning.

As I wrote last week, Daniel after a stay several weeks longer than he planned, has decided, understandably that a winter spent on the farm did not attract as much as an opportunity to work in Spain. In one important sense we rather failed him in that we could not really allow him to be part of the family. The coronavirus has had multiple side effects and included in that is keeping our distance for our own safety. Despite that, he leaves us I know, feeling his time here has been positive and his contribution much appreciated. He also leaves a rather disgruntled dog – Flash spent many hours with him in the caravan.

A new source of amusement

I have found a new source of amusement. “Maxwell’s History of the World in 336 lessons”. So, I share with you the suggestion that when Lord Palmerston died this day in 1865, he did so after saying the famous words “Die, my dear Doctor? That’s the last thing I shall do” and he was right! Maxwell featured in a long series of books written by the former history teacher M.J. Trow.

I have to confess I have not yet completely read Washington’s Crossing. In large part because I came to learn of the significant role the Hessians played, and in particular their part in the failures which allowed ‘the redcoats’ to be defeated in one battle, the consequences of which only played out two years later. My first thought was these must be Hanoverians, given the links between Hanover and Great Britain. My second was that they were minor players. I was absurdly wrong on both counts. Firstly, the Hessians by and large came from the two states of Hesse, not Hanover at all. The second mistake came from my not knowing that the British forces included some 30,000 hired German troops. Reducing my ignorance even if in a small way remains a great joy.

On reflection it all made sense, the military were not esteemed here as in most European countries, and I had forgotten that it was normal practice by the British to hire in soldiers when it came to warfare, since the British ‘standing army’ was comparatively small. My lack of interest, and hence ignorance, meant I forgot this likelihood – who can I shift the blame onto – perhaps Arthur Bryant whose trilogy on the Napoleonic wars dominated my early reading, and made the American ‘rebellion’ seen rather a sideshow. As in many ways it was, though not to the former colonists.

There are of course masses of books on this subject, and the topic is bedevilled by myth and national pride. Looking back, I was reminded of later situations where political decisions rather than military defeats led the British to withdraw from conflicts. That said, it does seem from writings at the time that there was a widespread belief that God had withdrawn his support from us and that, perhaps we were no longer his chosen people and this feeling may well have had minor consequences.

A last thought: few events in history make real sense if not studied in context. This American strike for independence followed a turbulent period in European history, in the course of which the famous quote ‘perfidious Albion’ might be seen as justified. The first struggle was over the Austrian succession, as there was no male heir only a daughter Marie Therese, a woman of formidable qualities.

Great Britain initially was a supporter of the Empress and backed her both financially and militarily. A later outcome was a dissatisfied Prussia and the Seven Year War. On this occasion, Great Britain joined the fight against the Empress, again at vast cost. To understand all this it is necessary to take into account the war to sort out the Spanish Succession and then… Hence at the same time as the War of Independence in America, Britain was fighting both the French and Spanish both huge adversaries.

In passing, a fact to perhaps mull over, the desertion figures for all armies involved were generally larger than the figures for deaths in conflict. Not of course true for the large number of men lost in shipping losses.

I can understand why most professional historians shy away from attempting to write general history. Much safer to specialise in a narrow historical field!

I have written more than once how lucky we have been, to date, in being so minimally affected by coronavirus restrictions, but I admit we miss very much the opportunity to talk at any length with the grandchildren, especially now they are getting older. Greetings exchanged through the windows are of course better than nothing but…

If we wonder at the way in which an American president can win on a minority of the popular vote, perhaps we should have sympathy and accept a sense of guilt. The process is after all an imitation of the electoral system in this country, where there is no absolute relationship between the popular vote and the number of seats in Parliament a party might hold. In due course nations which turned to the Presidential system realised the need for the popular vote to be decisive. It never pays to come up with the first design – think of the DH Comet!

Amusing to read of a famous cake maker’s complaint of the increasing number of reviewers wanting ‘freebies’. At once I was reminded of AP Herbert and his stories of ‘Misleading cases in Common Law’ – Herbert wrote both short and long stories exposing absurdities he saw in the law.  Given his first-class degree in jurisprudence, his credibility was never in doubt, as he humorously pointed out where he saw ‘what an ass the law was’. He used humour as his weapon’ of choice to make very serious points. Indeed, his writings on the then current divorce laws eventually led to radical change. His books are still readily available and are still worth enjoying. The issue of ‘freebies’ was the central theme of one of his stories which related a court case where a reviewer was being charged with extortion by a desperate company which, in the hope of a favourable review, had offered him more and more until they reached desperation point and realised ‘they were being taken for a ride’. The name of the dependent\extortionist just had to be Haddock.

As a celebration of the fact that we now have two Barn Owl nesting boxes to erect, I have chosen a short poem by Alfred Lord Tennyson: